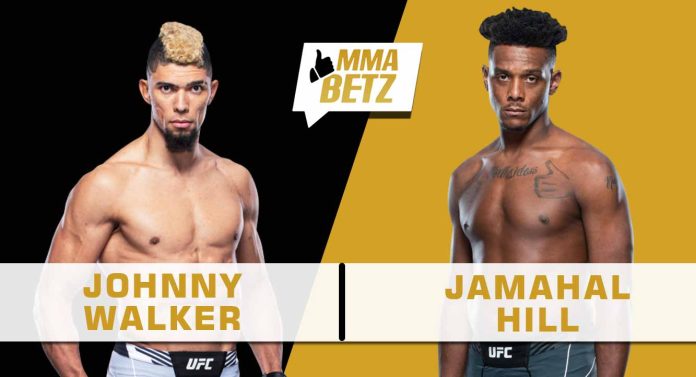 UFC Vegas 48 goes down this weekend at the UFC APEX in Las Vegas. In the main event, Johnny Walker takes on Jamahal Hill in an exciting light heavyweight contest.

Walker has lost three out of his last four fights, and is coming off a unanimous decision defeat at the hands of Thiago Santos at UFC Vegas 38, whereas Hill returned to winning ways at UFC Vegas 44, where he dispatched Jimmy Crute in the first minute of their fight. The fight between the two should be a banger because both fighters love to strike and have vicious knockout power.

The Brazilian is a very creative striker, who throws strikes from a variety of angles, but he’s not very sound defensively and tends to struggle against heavy hitters, although he showed technical improvements in his fight against Santos.

Hill is an athletic striker with dynamite in his hands. While Walker has the power to knock anyone out, he has a suspect chin, which is going to be tested by the American, who has a tricky southpaw stance and stinging strikes. Hill will also have momentum on his side as he’s coming off an impressive knockout victory against a durable Crute, but it won’t be an easy fight for him.

Walker has a slight edge in the grappling department, but he loves to stand and trade shots instead of fighting on the mat, just like Hill. Walker can find success if he tries to grapple with Hill and exploit his weaknesses. Hill has never fought a five-round fight before, and although he’s a fast starter, he tends to slow down as the fight progresses. If Walker avoids the early onslaught, he will have a great chance of getting the win.

Both Walker and Hill are very well matched, and it’s a very even contest, contrary to what the odds suggest. All in all, Hill will outstrike Walker and get the win on the night.

Who do you think will win the UFC Vegas 48 main event between Johnny Walker and Jamahal Hill?