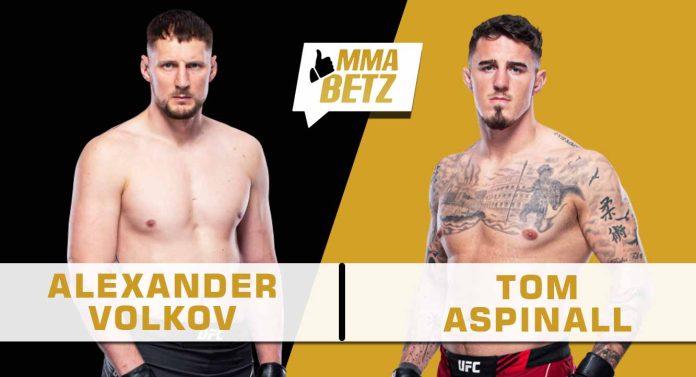 UFC London goes down this weekend at the O2 Arena. In the main event, Alexander Volkov will face a rising star in Tom Aspinall.

Volkov is 8-3 in the UFC and is coming off a unanimous decision victory against Marcin Tybura at UFC 267. The veteran fighter holds notable wins over Alistair Overeem and Fabricio Werdum and is a solid gatekeeper near the top of the division. Aspinall has had a blistering start to his UFC career. He has finished all of his four UFC opponents, with his most recent victory coming against Sergey Spivak at UFC Vegas 36.

Aspinall is an extremely well-rounded fighter, with crisp boxing and excellent grappling, but Volkov has fought the who’s who of MMA, and will be the Brit’s toughest test to date.

The Russian has high-level kickboxing ability with high output, although he has been a little gun shy in his past few fights. He’s also tall and lanky and manages the distance really well. Aspinall is lightning fast, with excellent movement, pressure, and output. He will come out all guns blazing to try and put Volkov on the back foot from the get-go and get the finish. Despite being slower and less aggressive, Volkov is still a hard man to hit, as he manages distance well.

Aspinall has the edge in the grappling department as well. He lands close to three takedowns per fight, and has a hundred percent takedown accuracy and defence. Volkov won’t be an easy man to take down, especially early on, but if Aspinall mixes things up and keeps his opponent guessing, he will find success in grappling as well.

Who do you think will win the UFC London main event between Alexander Volkov and Tom Aspinall?