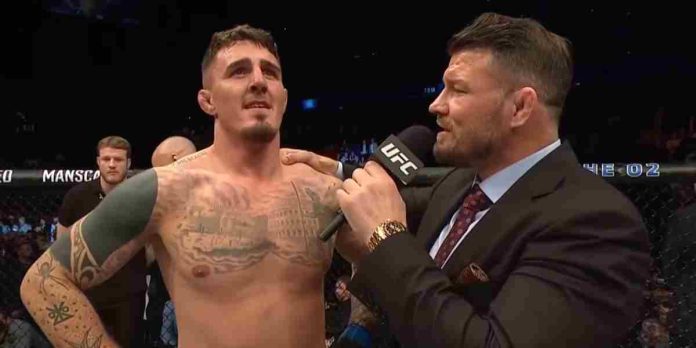 Tom Aspinall has explained why he isn’t interested in fighting for the UFC interim heavyweight title for the time being.

Aspinall improved to 4-0 in the UFC by scoring a dominant first round submission victory against Alexander Volkov at UFC London. With reigning champion Francis Ngannou expected to stay on the sidelines for a year after undergoing successful knee surgery, Dana White said that the UFC will likely introduce an interim title, with Stipe Miocic, Jon Jones, and Tai Tuivasa being the frontrunners to fight for it.

During an interview with Shakiel Mahjouri (as transcribed by BJPenn.com), Aspinall was asked about the possibility of him competing for interim gold. In response, the Brit said that he isn’t thinking about gold at the moment because the likes of Miocic, Jones, and Ciryl Gane are more deserving.

“That’s not really something that I think about [the interim title]. I’m not interested in that, really. I think there are other people that deserve it more like Stipe or Jon Jones. There are definitely other people who deserve it more than me. I’ve only just broken into the top 10. I’m not looking at doing any of that stuff. Look at Ciryl Gane, he was this close to beating Ngannou. People like that guy deserve it way more than me.”

Do you agree with Tom Aspinall?