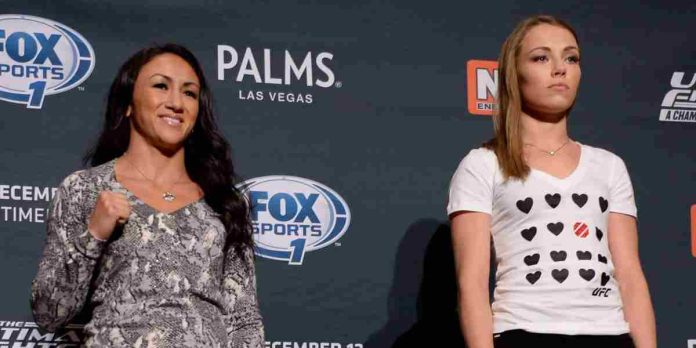 Ahead of her rematch against Carla Esparza, Rose Namajunas has said that her loss to ‘Cookie Monster’ in their title fight in 2014 transformed her into the fighter she is today.

Namajunas is coming off back-to-back wins against Zhang Weili. She knocked the Chinese sensation out in the first round to become a two-time strawweight champion at UFC 261, before defending it in a closely contested fight against ‘Magnum’ at UFC 268. Esparza is currently riding a five fight winning streak, with her most recent win coming against Yan Xiaonan by second round TKO at UFC Vegas 27.

The two fought for the first time at The Ultimate Fighter 20 Finale, where Esparza submitted Namajunas in the third round to win the inaugural 115 pound title. Both fighters have grown a lot since their fight, particularly ‘Thug’ Rose, who is easily one of the most technical fighters in the UFC.

Speaking on MMA Fighting’s The MMA Hour, Namajunas said that she wasn’t ready for the responsibility that comes along with UFC gold when she first fought for it, and her loss to Esparza was a blessing in disguise.

“Had I won that fight, who knows where I would be,” Namajunas said. “I was going to be youngest champion, like, younger than Jon Jones. Not definitely, but I can only imagine that with winning a fight like that at that point in my life, I probably would have crashed a few cars, or been doing all kinds of bad things. My life probably would have been way more out of control. Joanna [Jedrzejczyk] probably would have whipped my ass.

“I wouldn’t go back and change anything for nothing. That fight was the best thing that probably happened to me in my whole career. All of my losses have done wonders for me. But that one in particular, there was a lot of information that I downloaded.”

Who do you think will win the strawweight title fight between Rose Namajunas and Carla Esparza at UFC 274?