With a 25% ROI on the season, (from 42 bets) Mark O’Haire is confident of staying in the black with two more weekend selections from the continent.

SASSUOLO SHOULD PROVE TOO STRONG

The market makes Salernitana a 96% chance to suffer immediate relegation back to the Italian second-tier.

The Campania club returned to Serie A for the first time in 23 years this season but the Granata have found the going very tough, winning just three games and sitting 10 points from safety with only 12 games left to play.

Head coach Davide Nicola arrived in February on a rescue mission, and whilst the former Genoa boss has made Salernitana slightly more competitive, the rock-bottom outfit remain a long way off the required standards to consolidate their top-tier status.

The Granata have toiled in both boxes throughout the campaign.

In fact, the Salerno side prop up all the major rankings for chance creation, conversion, and concession, and if we exclude their efforts against their fellow scrappers in the bottom-four, Saturday’s hosts have suffered 17 league losses in 22 outings, highlighting the quality gap.

Salernitana have managed a solitary shutout all season, are allowing 1.88 Expected Goals (xG) per game on average, and have plundered either zero or one goal themselves in 19 of 26 Serie A tussles.

It’s a concerning return when preparing to take on swashbuckling Sassuolo at the Stadio Arechi. 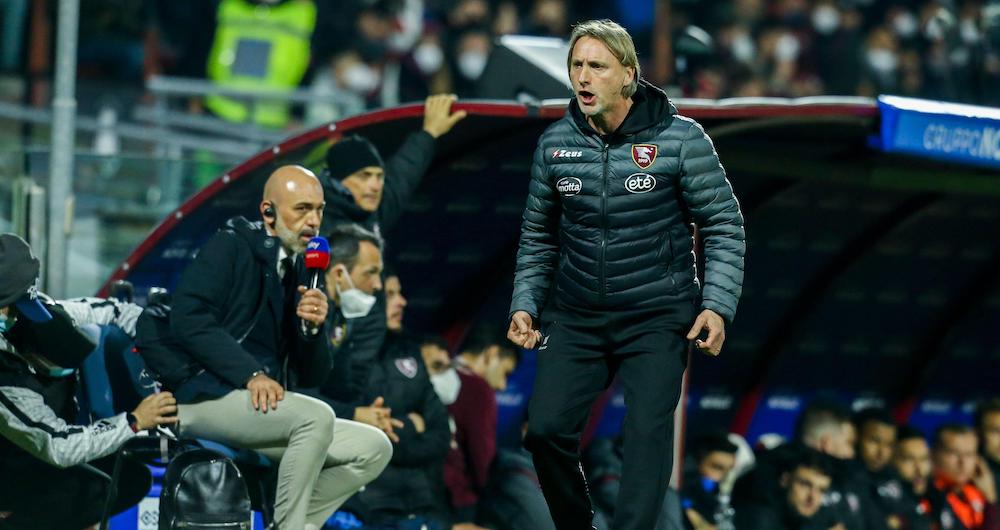 Salernitana Davide Nicola faces an almighty task in keeping his side in Serie A for next season.

Sassuolo have hit form of late, churning out three successive victories, equally impressive in their own right.

The Neroverdi turned defending champions Inter Milan over 2-0 at San Siro, before creating carnage in a 2-1 home success against Fiorentina, and then comfortably dispatching relegation-threatened Venezia 4-1 last weekend.

Alessio Dionisi’s freewheeling troops have now scored 30 goals in 14 away days – only table-topping Milan have posted a better goals-per-game figure on their travels – with Sassuolo striking twice or more in 10 of those 14 games as guests. The Neroverdi have reached the feat in seven of nine trips to teams outside the top-six and could enhance that record here.

The visitors will arrive with a full complement of attacking players and that means the eye-catching trio of Domenico Berardi, Gianluca Scamacca and Giacomo Raspadori will be in tandem – the three Sassuolo stars have proven remarkably consistent, contributing 32 Serie A goals and 15 assists between them in an exceptional campaign.

With that in mind, Sassuolo are a reasonable price to pick up top honours on Saturday, but we can take the 2.05 available on the Neroverdi winning alongside Over 1.5 Goals in the game – we’re effectively ruling out the 1-0 away day success with 47/54 (87%) of the duos combined league fixtures featuring Over 1.5 Goals.

ZURICH TOO BIG TO TURN DOWN

FC Zurich are closing in on their first Swiss Super League title since 2009 with Andre Breitenreiter’s boys extending their exceptional unbeaten run after the winter break.

FCZ are 15 points clear at the summit thanks to their W14-D3-L0 streak that started in October and has included beating all three of their top-four rivals.

The surprise pacesetters have proven good value for their insurmountable advantage, with a strong home record providing an excellent foundation to work from.

Zurich have posted W10-D2-L0 at their Letzigrund base, smashing in 33 goals in 12 home outings, and comfortably winning the Expected Goals (xG) battle on nine occasions.

Breitenreiter’s outfit have proven particularly prolific in the final third, failing to score just once and racking up two goals or more in 18 (72%) of their 25 fixtures (averaging 2.36 goals-per-game).

It’s a surprise to see FCZ offered at odds as big as 1.95 on Saturday to overcome a -0.50 Handicap hurdle at home to St Gallen.

It’s been far more sunshine than rain for Andre Breitenreiter’s side this season.

Zurich have proven ultra-consistent when taking on the ‘best of the rest’ – exclude encounters with Basel and Young Boys and the home side have taken top honours in 16 of their 20 such Super League outings, racking up 50 goals.

And whilst St Gallen arrive unbeaten since the winter break (W4-D3-L0) to move clear of immediate relegation trouble, Espen have suffered seven defeats in 12 on their travels, giving up 1.86 xG in games as guests, and have managed a paltry three clean sheets across all venues.

Peter Zeidler’s offensive outfit caused both Young Boys (3-3) and Basel (2-2) problems this calendar year yet their porous rearguard is difficult to trust – Zurich have scored three goals in each of their two meetings with St Gallen this season and a similar feat should put the league leaders into a strong position to secure top honours at a generous 1.95.