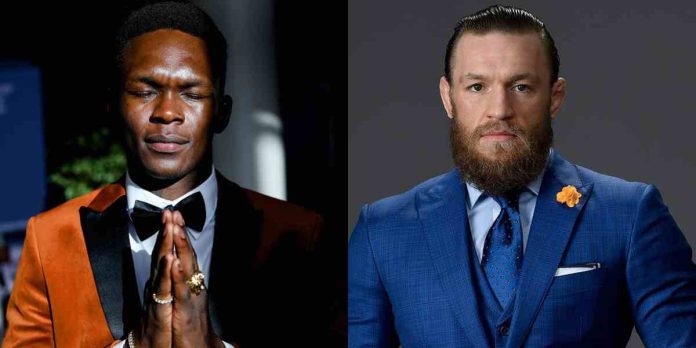 Israel Adesanya has said that he’s been a fan of Conor McGregor since his UFC debut, a day after the Irishman heaped praise on him.

Adesanya will defend his middleweight title in a rematch with Robert Whittaker this weekend at UFC 271. In their first fight at UFC 243, ‘The Last Stylebender’ knocked out ‘The Reaper’ in the second round to win the belt.

The highly anticipated rematch between the two has McGregor excited as well. ‘The Notorious’ took to Twitter to heap praise on Adesanya, calling him one of the few remaining high level fighters and performers in MMA, and said that he can’t wait to watch him fight.

“Can’t wait to see Izzy Style back in the Octagon this weekend. One of the true remaining high level fighters and performers we have on the roster. Don’t just fight. Perform,” McGregor tweeted.

During the UFC 271 media day, Adesanya said that he’s been a fan of McGregor since his UFC debut, and appreciates what he’s done for the sport.

“Real recognise real,” Adesanya said. “We’re on the same team when it comes to Paradigm. Yeah, I think I’m second place now when it comes to the highest-paid fighter on the roster; and yeah, well, active right now. But Conor is a guy that I’ve admired from the jump; from the jump, when he fought Marcus Brimage.

“And he’s a guy that – he’s a performer. So, when he said ‘perform,’ I know what he means. We know. Like, you don’t just go in there and fight. You perform. We understand the magnitude of stepping up in the main event; not just showing off, but showing out. So, yeah, I appreciate Conor and I appreciate what he’s done for the game.”

Do you think Israel Adesanya will put on another stellar performance against Robert Whittaker at UFC 271?