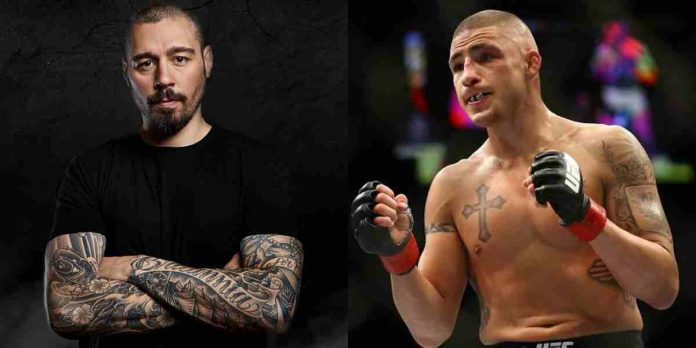 Dan Hardy is set to make his return to combat sports after almost a decade against The Ultimate Fighter 1 winner Diego Sanchez.

Hardy will face Sanchez in an eight, two-minute round boxing exhibition on July 2nd at AO Arena in Manchester, England. The 39-year-old chased former UFC welterweight champion Tyron Woodley for months, before finally signing the contract to fight ‘Nightmare’, someone he always expected to cross paths with.

The Brit last fought in 2012, when he defeated Amir Sadollah in his hometown of Nottingham. He was forced to step away from competition after being diagnosed with a rare heart condition but was later cleared to fight, although he opted to focus on his career as a broadcaster. Since parting ways with the UFC as an analyst, however, ‘The Outlaw’ has shifted his focus on fighting.

Speaking on his YouTube channel (as transcribed by BJPenn.com), Hardy gave his thoughts on his boxing fight against Sanchez.

“Diego and I have been on a bit of a collision course for a long while,” Hardy said. “I think it was back in like 2006 when we got a faceoff when we were fighting in Holland. It’s always been on the cards. I mean, we’ve always been in the same weight class. He was slightly ahead of me in his UFC career. So, like, as I signed with the UFC, I was watching him fight the likes of Clay Guida at the Pearl at the Palms. I’ve got some good memories of Diego’s fights. You know what you’re going to get with him. He’s an animal. He comes to scrap every time.

“This is big gloves boxing, this is 16-ounce gloves over eight rounds so we can beat the hell out of each other and have a lot of fun with it. I’m still confident I’m gonna be able to stop him inside the distance, but it’s gonna be a bit more difficult with the 16-ounce gloves and with just one skillset, but this is a good place for me to start, get myself back in proper condition, proper fight shape and then we’ll see where we’ll go from there. I think there are other options with Diego, assuming I don’t beat him up too badly in this boxing match. We might be able to do MMA, or bare-knuckle, or something afterward. This is the first step in the rung of the ladder if that makes sense.”

Who do you think will win the boxing match between Dan Hardy and Diego Sanchez?