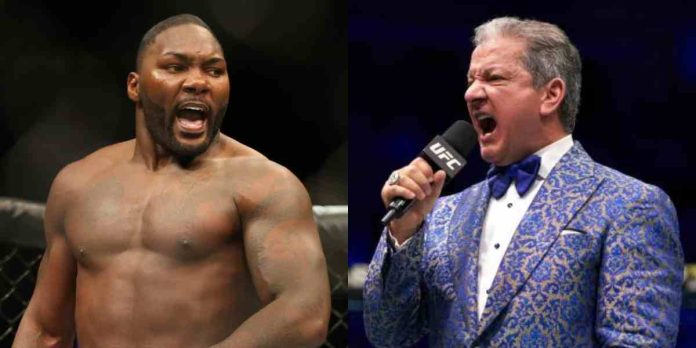 Anthony Johnson has fired back at Bruce Buffer for saying that UFC fighters become irrelevant once they leave the promotion.

Speaking on his ‘It’s Time’ podcast (as transcribed by BJPenn.com), Buffer gave his thoughts on UFC heavyweight champion Francis Ngannou’s contractual dispute with the UFC. He said that ‘The Predator’ shouldn’t leave the UFC because fighters become irrelevant once they part ways with the ace MMA promotion.

“No offence to other organisations, but you become irrelevant when you leave the UFC after a while,” Buffer said. “Instead of losing in the UFC your contract is being ended in the UFC, and you fall from the Octagon down into Bellator [etc]. Let’s just hope everybody gets together [to sort out a deal].”

Johnson, who parted ways with the UFC to join Bellator in 2020, fired back at Buffer saying that he is receiving bigger paychecks in his new promotion.

“Bruce needs to stay off crack… How’s anything irrelevant when providing food and shelter for family? Oh, by the way, I got paid way more for moving to another organisation,” Johnson wrote on Instagram. “Bruce has his guaranteed money so he can talk. Fighters have to wait and actually entertain people when they get the chance to make some money.”

Ngannou has been at odds with the UFC over his current contract. He believes his title defence against Ciryl Gane at UFC 270 was the final fight on his current contract, and he won’t sign a new deal unless he gets a bigger piece of the pie, and the freedom to compete in the world of boxing.

UFC president Dana White argues that the Cameroonian’s contract includes a champion’s clause, which could extend the deal for either one year or three fights. The heavyweight champ is expected to spend the rest of the year on the sidelines due to injury, which means both parties have enough time to settle their differences.

Do you agree with Bruce Buffer that UFC fighters become irrelevant once they leave the promotion?