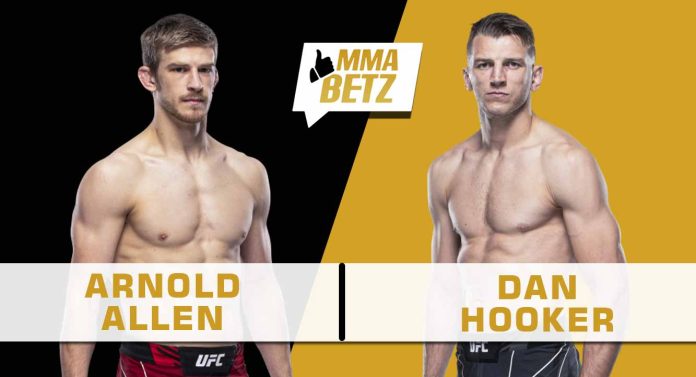 UFC London goes down this weekend at the O2 Arena. In the co-main event, Dan Hooker makes his return to featherweight to face Arnold Allen.

Allen is currently riding an eight-fight winning streak in the UFC, with his most recent victory coming against Sodiq Yusuff at UFC Vegas 23, whereas Hooker is coming off a first-round submission loss to Islam Makhachev in a lightweight bout at UFC 267.

Allen vs Hooker is a very close fight. The Brit is good at everything, and is comfortable anywhere the fight goes, whereas Hooker specialises in striking, but he has worked quite a lot on his grappling, especially his takedown defence, in the past few years.

The New Zealander has the edge in striking. He has a high output, great combinations and will have a significant reach advantage against his opponent, but Allen’s ability to mix things up will cause ‘The Hangman’ a lot of problems. ‘Almighty’ has a solid striking defence as well.

Allen has the edge in the grappling department, and he will constantly look to take the fight to the mat. He has solid wrestling and BJJ, and certainly has the skills to take Hooker down, but the 32-year-old has a very good takedown defence.

It’s a really tough one to predict, but Hooker will use his experience, length and pace to earn a unanimous decision win.

Who do you think will win the UFC London co-main event between Arnold Allen and Dan Hooker?