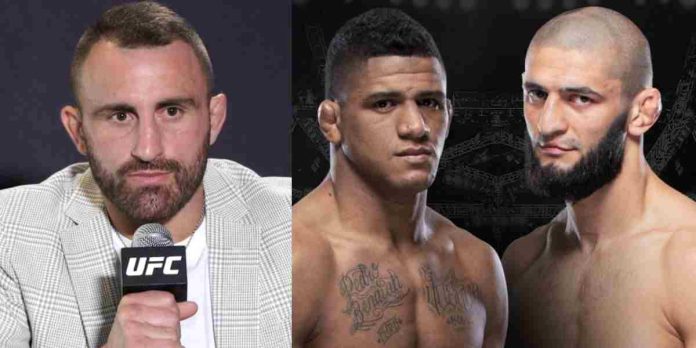 Alex Volkanovski has given his thoughts on how he believes the highly-anticipated fight between Khamzat Chimaev and Gilbert Burns will play out.

Burns will face Chimaev in a potential welterweight title eliminator on the main card at UFC 273, headlined by the featherweight title fight between Volkanovski and ‘The Korean Zombie’. ‘Borz’ has finished all of his four UFC opponents in a dominant fashion, with his most recent win coming against Li Jingliang at UFC 267. He is a heavy favourite against the Brazilian.

Alex Volkanovski On Burns vs Chimaev

Speaking to James Lynch (as transcribed by BJPenn.com), Volkanovski said that he believes Chimaev will maul Burns.

“Obviously he’s got a lot of hype,” Volkanovski said. “So, people that don’t really know the sport are expecting him to win but people that really do know the sport are probably – ‘Yeah Burns on the ground, you know world champion’. They’ll be surprised if Chimaev goes out there and just mauls him, and I feel like that’s what gonna happen. I feel like that is where Chimaev is at right now. I think he is actually gonna go out there and show some dominant performance which is gonna be pretty incredible against someone like Burns.

Who do you think will win the welterweight bout between Gilbert Burns and Khamzat Chimaev at UFC 273?