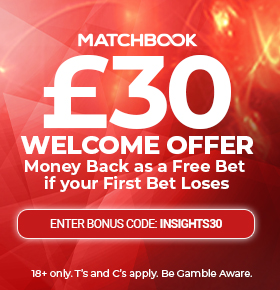 Betting is littered with euphoric highs and despairing lows, It’s how you ride out those wild swings that count. To be a winning bettor, you need to learn to love variance.

Anargyros Nicholas Karabourniotis, otherwise known as Archie Karas, arrived in Las Vegas in the early nineties with just $50 in his back pocket. In the space of just three years, he spun his meagre bankroll up to a staggering $40m and earned himself a spot in gambling folklore.

However, the good times didn’t last forever. And he ended up blowing his fortune like he had amassed it – gambling. Whether it was luck turning against him or bad bankroll management, we’ll never know for sure, but it teaches us all an important lesson.

Hot and cold streaks are part and parcel of gambling. One minute the cards will fall your way, the next, it feels like ‘Lady Luck’ has your head – and wallet – wedged beneath her sharp stiletto.

Variance, as they say, can be a bitch.

Variance is more than a posh word for luck; it’s about how much a situation varies from its average. For instance, you might call heads every time a coin is thrown but it repeatedly lands on tails ten times in a row. It can’t be possible; you’re cursed. But this is just variance.

While on average, it’s supposed to be tails one in every two, that’s not how it varies in practice.

Of course, if you were to repeat this process a thousand times, you’d expect to have an even spread of heads and tails results, and your bankroll would be roughly level. But variance usually wins out over pure probability in the short term.

Learning to cope with these swings and seeing gambling as a long-term proposition is how you win out in the long term.

Over the short term, variance is particularly high in sports due in part to the myriad of variables that are out of your control.

For example, you can’t account for the referee inexplicably awarding an extremely dubious penalty to the losing side in the 93rd minute when their flimsy Brazilian playmaker crumples in the box like a cheap suit.

And unless you are some sort of mythical sporting event soothsayer, the simple fact is you aren’t going to be able consistently to predict sports results. If only it were that easy. In reality, you should expect to be unlucky sometimes.

You should embrace variance because it will affect you whether you like it or not.

Winning is about doing your homework, betting accordingly and hoping that variance evens itself out, allowing you to back enough winners at the right prices to come ahead in the long run.

Even the most profitable and disciplined bettors experience bad runs for no apparent reason.

If you specialise in backing horses in the big competitive sprint handicaps or perhaps the PGA or European Tour golf events with over 100 players, it stands to reason you’ll endure prolonged losing streaks.

Your expectation is to find an occasional big-priced winner to cover previous losses and put you back ahead. A couple of juicy-priced winners on the bounce, and you’re laughing. But it’s when you seem to back a succession of losers, and you can’t seem to get a lucky break that it’s easy to start questioning your ability.

Choosing how and when you bet is as much about managing your own expectations as managing the odds.

It could be a case that you’re better off backing shorter prices to try to land consistent winners, as renowned legendary sports gambler Harry Findlay once said.

He spoke about the importance of backing winners in terms of instilling confidence. He demonstrated this by suggesting ‘Punter A’ backs 20/1 shots. After 20 losses in a row, he backs a winner and is level. ‘Punter B’, on the other hand, always bets even-money shots.

After 10 winners and 10 losers, he’s back where he started. “They’ve both got the same money,” said Findlay, “but he’s been right ten times. Who’s going to have more confidence?” It’s similar to betting on a coin toss or the roll of a six-sided dice; hitting a specific number on the die is a 5/1 chance, so naturally, you will normally experience longer losing streaks gambling on the cube.

The impact of variance and inevitable losing streaks mean having a separate bankroll is imperative.

Betting with money you’ve set aside for that ugly gas bill just puts added pressure on unearthing those elusive winners. This could lead to you making rash decisions and ill-judged bets or, worse still, chasing losses.

Although they feel great, Winning streaks also need to be handled properly.

When everything you touch seems to turn to gold, and you’re backing winners for fun, quiet confidence can quickly turn into hubris, and before you know it, you’re sticking bets on sports and markets you don’t fully understand.

One other danger sign is if you’re betting too much of your bankroll on selections. This may have led to Karas’ downfall. Truth be told, there is a chance your purple patch was influenced to a large extent by luck or variance, which is bound to even itself out eventually.

Ultimately, staying consistently in the black in this game takes great mental fortitude.

This is why it’s important not to get too carried away when you’re winning and not get too depressed when a losing streak kicks in.

Keep records and analyse both your winning and losing bets.

And sometimes, taking a break and returning refreshed with a clear mind can pay dividends.

Remember, winning and losing streaks are simply an unavoidable aspect of betting, particularly on sports. Indeed, coping with – and appreciating – the upswings and downswings associated with variance is key to becoming a successful, level-headed bettor.